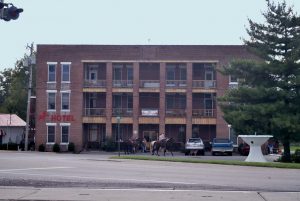 The Walking Horse Hotel is located in Wartrace, Tennessee. This city is just under an hour outside of Nashville, Tennessee. A small town, the population was only 651 at the 2010 census. The entirety of the downtown area is listed on the National Register of Historic Places as the Wartrace Historic District.

The town, formerly known as Wartrace Depot, was the winter headquarters of Confederate General William Hardee during the Civil War. Wartrace was a gathering place for Confederate soldiers during the Tullahoma Campaign, where a skirmish was fought at Wartrace on April 11th, 1862.

The name Wartrace is truly a foreshadowing of the history that would accumulate in the small town. War ravaged the area; Union and Confederate soldiers called Wartrace home, staying in the hotels and inns in between battles. The town saw many faces, some of which were bloodied and battered. Wartrace has a history in rail travel, war, and horse breeding. With the increase of railway travel and trade in the late 19th century, and the town experienced a significant boom. At its height, the town had six hotels and inns and saw thirteen trains a day. One hotel, the Walking Horse, is still in business today.

A Hotel That Just Won’t Stop

As one could assume, the Walking Horse Hotel is on the National Register of Historic Places. The hotel is still in operation and also contains the Strolling Jim Restaurant, named for the original owner’s World Grand Championship-winning show horse. It seems like all of Wartrace’s history is tied back to horses!

The hotel was first built in 1917 as a railroad hotel and was named the Hotel Overall. The weathered three-story brick icon was purchased back in 1933 by Floyd and Olive Carothers. Later in the 30s, it was the base for a group of horse trainers, who eventually created the Tennessee Walking Horse National Celebration, a large annual horse show held for the first time in 1939. Because of this event, the hotel’s name was changed to the Walking Horse Hotel.

Back during the Civil War, Union soldiers released many of their Confederate prisoners of war at the hotel during the end of the war. Many of these soldiers were very ill and malnourished. They lasted a few days here as free men, but a number of these men perished inside of the hotel.

Former owner George Knight says that guests always came to him flustered, with reports of strange apparitions in the upstairs hallways. Another owner, Joe Peters, sold the hotel after hearing all of the reports from former owners and hotel employees. He said that the hotel is not evil, it’s not demonic, but there is a haunting at the hotel.

George Knight owned the hotel in the eighties, and he says that he thinks he knows one of the spirits haunting the hotel – Floyd Carothers. He said that Floyd loved this hotel, owning it with his wife, Olive. Knight even believes that Floyd has kept the hotel safe all of these years, with one instance, in particular, that is incredibly mysterious.

Knight said that he was home one night when get felt a strange urge to go and check on the Walking Horse. He walked to the hotel and noticed a small fire before it got out of hand. The fire could have been completely catastrophic, destroying the entirety of the historical icon.

Joe Peters recalls a strange situation that spooked him that guests told him about. Guests have heard hoof sounds of horses on the ground floor, as well as the sound of a large group of horses running across the hallways upstairs.

This guest was staying at the Walking Horse Hotel as part of a trip centered around the history of Tennessee. She said that the trip was going wonderfully, the hotel was beautiful, and she was enjoying herself thoroughly. One night as she was settling down to go to sleep, she heard a thunderous bang in the wall behind her. It shocked her; she immediately sat up, thinking that the wall itself was going to collapse. It happened again, this time a knocking sound. She raced to the front desk, only to figure out that the room next to her was completely empty. There wasn’t supposed to be anyone in that room. Hotel staff checked out the room to be sure that no foul play was being overlooked. Nobody. Just an empty hotel room.

Hotel employees sent the guest, spooked, back to her room. She laid back down, hoping that perhaps the banging she heard was just that of an old pipe system in the building. She managed to fall asleep, but in the dead of night (no pun intended), she awoke to an apparition of a tall, thin man standing at the foot of her bed. She was frozen in fear, thinking that another guest had broken into her room. She reports that the apparition started to float up to the ceiling, onto the ceiling, and then above her bed. He then ‘melted’ into the ceiling, disappearing for the rest of the night. A truly spine-tingling stay, we’d say.

Another instance of haunted history at the hotel occurred in the 1970s. A Vietnam war veteran was staying in the hotel when something happened to trigger his PTSD. Something horrible happened shortly after when he had a flashback and ended up shooting four of the hotel’s other guests to death.

The hotel is very active, mainly with the spirit of former owner Floyd, but sometimes a spookier presence is felt. Guests tell of unexplained voices, missing personal items, gunshots, horses running, and even humans running up and down the hallways in the middle of the night.

Of the hotel’s thirteen rooms, room eleven is said to be the most active. In this room, guests report a strong feeling of being watched. By who? It’s unknown. Doors are also known to open and close on their own; guests feel lightheaded, dizzy, and nauseous throughout the hotel on certain nights, and a man with slicked-back black hair and a thin black mustache is also reported.

The hotel remains in operation, seeing guests of all kinds from all over the United States. Paranormal researchers have stayed in the hotel, coming out of their investigations with intense evidence of paranormal activity. Have you ever heard of the Walking Horse Hotel? Does this sound like the kind of paranormal getaway for you? You’re in luck, the hotel is open to the public, and staff (as well as spirits) are ready to welcome you for a spooky stay.