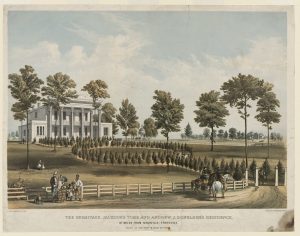 Located in Davidson County, Tennessee, just 20 miles east of downtown Nashville, lies a stately historic home-turned-museum. Lined with large white pillars, the 1000 acre site used to be the home of former President Andrew Jackson. It relied entirely on the labor of enslaved African-American men, women, and children. He owned the house from 1804 until his death at the Hermitage in 1845. Jackson only lived at the property occasionally until he retired from public life in 1837. The grounds of The Hermitage also serve as the final resting place for the former President. Now, the home is considered a National Historic Landmark.

The Hermitage was built in a secluded meadow that Rachel Jackson, Andrew’s wife, chose. From 1804 to 1821, Jackson and his wife lived in a log cabin. Together, the complex formed the First Hermitage, with three cabins, the West, East, and Southwest.

Realizing he could give more to his wife and family, he commissioned the construction of a more refined house, and the original mansion was built. It was a Federal-style building with bricks manufactured on-site by skilled artisans. Construction took two years. The house had four rooms on the ground floor and the same amount on the second story with a large fireplace. The large hallways were able to be opened, and the Jacksons enjoyed the breezeway in the summertime.

In 1831, while Jackson was still residing in the White House, he had the mansion remodeled. He added wings to the main house and a one-story entrance porch with ten columns. Jackson truly wanted this home to look as exquisite as possible. The home also had a working garden that provided not only status to the home but food for the table. An ornamental pleasure garden was also added, which serves as the resting place for Rachel Jackson after she died in 1828. She loved the garden and told Andrew she wanted to be buried there when she passed. Andrew even commissioned a monument to his beloved, which is located atop her gravesite. Unfortunately, a chimney fire seriously damaged the home and led to Jackson building the current 13-room home atop the first home’s foundation.

Behind the mansion is a smokehouse that dates back to the early 19th century. The kitchen of the smokehouse dates back to 1831 and cured 20,000 pounds of pork a year! Nearby is a slave cabin known as Uncle Alfred’s Cabin. Alfred Jackson was born a slave of Andrew Jackson at The Hermitage around 1812 and worked a number of odd jobs there. After the Civil War, he stayed as a tenant farmer and later worked as a guide and caretaker following the purchase of the estate in 1889 by the Ladies’ Hermitage Association. After all of his love and care given to The Hermitage, he was buried alongside the former PresidentPresident and his wife in 1901 when he died. Part of The Hermitage estate that passed into public hands became the site of the Confederate Soldiers Home, a residential facility that housed destitute and disabled Confederate veterans starting in 1892. More than 480 veterans died there and were buried on-site in a cemetery on the grounds. Each grave is marked with a white, military-style gravestone.

A Little Bit On Andrew

Andrew Jackson was born March 15th, 1767, and was the 7th President of the United States. Before his time as PresidentPresident, Jackson gained fame as a general in the Army and served in both houses of Congress. Jackson sought to advance the rights of the ‘common man’ against a ‘corrupt aristocracy’ and to preserve the Union. A strange stance for a man who owned slaves in the South. Even with his questionable doings, he did raise an orphaned Native American girl named Lyncoya and was intensely loyal to his friends and family. During his political career, Jackson was considered a master politician. He and his associates proved themselves as the most skillful political leaders of their generation. When he retired from the presidency, he left a well-organized Democratic Party in his wake. Jackson’s age and illness finally overcame him on June, 8th 1845. Surrounded by family and friends on his deathbed, Jackson was startled by their sobs. He said, ‘what is the matter with my dear children? Have I alarmed you? Oh, do not cry. Be good children, and we will all meet in Heaven.’ He died immediately after at the age of 78 from chronic dropsy and heart failure.

Death and Hauntings at The Hermitage

We know of at least 482 deaths that occurred on the Hermitage grounds, all of which resulted in remains being buried there. That’s not even counting the lives lost of the slaves that worked the land. The spirits that reside here seem to inhabit the entire property. One report, which dates back to the 19th century, tells of two women who decided to stay a night at The Hermitage… The Ladies Hermitage Association had just taken ownership of the home and property, so a caretaker was not yet hired to look after the grounds. A couple of the women who were part of the Association volunteered to stay in the house overnight to ensure it would not be vandalized.

The two women prepared to lay down to sleep when the loud noises began—aggressive sounds, chain-like drags, coming from the butler’s pantry. The noises became louder and louder until a rolling boom clapped, seemingly shaking the home right off of its foundation. The women later described the boom as a large horse being ridden right down the middle of the home. Could this sound have been Andrew Jackson and his steed returning home from war?

The stories carry over to modern times, too. One night after an event at the home, an employee was making his rounds, locking up for the night. He whistled to himself as he walked the lonely hallways when he heard another voice whistling. He frantically searched for the whistler, thinking maybe he had not let all of the visitors out. He found no one – living, that is – and ended up calling his boss to come and check the home as well. No one was ever found.

The Hermitage home itself isn’t the only haunted playground. The gardens and surrounding acres are also overrun with spirits. After Andrew’s wife passed, he visited her monument in the gardens every single day, smoking a cigar and talking to his beloved. Today, many visitors report seeing and feeling the ghost of Andrew in the gardens. People have heard unexplained footsteps between the foliage and have even seen the garden gate swing open on its own. There is also the unmistakable smell of cigar smoke near the Jackson’s tomb…

The Hermitage is truly a testament to Jackson and his life. The trees are even curated; each one was removed from a battle site where Jackson fought and then replanted in the gardens surrounding the home. These trees hold inside of them the history and memories of the violent battles and lost lives. Guides at The Hermitage have reported seeing apparitions of Civil War soldiers walking around the property, and cold spots and chills are common for visitors. Could these occurrences be the souls of the soldiers who lost their lives in the battles of the Civil War? Perhaps they took their final breath resting up against one of the replanted trees. All one can do is speculate, listen, and offer comfort and solace to spirits of ages passed.