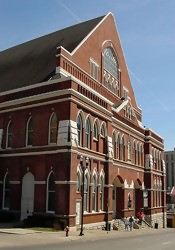 The Ryman Auditorium is best known as the Grand Ole Opry. It is very well-known are in Nashville and the United States. Most people refer to this place as the building that hosted the Grand Ole Opry. The building itself is over a century old and it is a National Historic Landmark. It is even listed under the National Register of Historic Places. This auditorium has hosted many different celebrities. It has had some of the most popular people in the history of the country music industry. It is one of the most visited places in Nashville, however, not only because it is popular for its country music. It has a darker side that includes paranormal activity that many people like to visit as well.

The auditorium has 2,362 seats. It would host live performances. You can find it at 116 fifth avenue North. The Grand Ole Opry would use this building for several years. It was entered into the historic places in 71 and  2001 was considered a historical landmark. The role that the opry had on the building is what made it into the national historic landmark. It had popularized country music to what we know and love today.

This auditorium was first established and constructed in the later part of the 1800s. It was constructed by a man named Thomas Green Ryman. Ryman was a businessman who had fleets of riverboats and he owned several saloons.

He wanted an area that was located indoors for those who wanted to attend the tent revivals religion. This was a popular religion at the time and era. He had gotten this idea from Samual Jones. Ryman had been to one of Samual’s tent revivals. He went to heckle however, he was converted. He was so converted that be had built the auditorium. He had pledged to make an area in which people could go indoors.

He had done just that. The building took several years to complete. It was completed in 1892 with the name Union Gospel Tabernacle. The project cost about 100,000 dollars at the time. Today that would be almost three million dollars. Jones would hold the first revival of the site. This would happen in 1890. The building would only have the foundation up and six-foot walls.

With that being said, the architect on the job, Hugh Cathcart Thomson had exceeded the budget that was allowed for construction. The auditorium had opened with 20,000 dollars worth of debt. Today that is over 500,000 dollars in debt. Keep in mind that the building was supposed to have a balcony. The limit of funds had eliminated the building of the balcony. However, it was built in and would be open in 1897 for a gathering. The funds were provided by those who attended this gathering. When the balcony was completed there were 6,000 seats, however, in 1901, the stage was built. This would reduce the capacity to what it is today.

Jones wanted to name this area after Thomas, however, he denied several times. It wasn’t until he had passed away and the memorial service was held at this auditorium that the name would change. It was Jones who proposed that they rename the auditorium in honor of Thomas Green Ryman. This proposal occurred during his memorial service and all the people in attendance agreed. Two years after this, Jones had died as well.

After Ryman had passed away, they started to rename the building in his honor. This decision was made at his funeral services. The auditorium was now named the Ryman Auditorium.

The building was designed to be used for worship, however, it was leased out many times for other events. It would be leased out to help pay for the debts and keep the auditorium open.

In 1904, after Ryman had passed away, Lula C. Naff was a stenographer. She had begun promoting and speaking concerts, engagements, and even boxing matches. She had several different uses for the Ryman during her free time. It was in 1914 that Lula’s employer had gone out of business. After this, she had made booking the events a full-time job. In 1920, she was considered a manager for booking. She eventually would go by the name of L.C. Naff. She would go by this name to avoid prejudice because she was a female in the male-dominated industry. She was known for battling local groups. Censorship groups were trying to ban many performances that seemed risque. It was in 1939 that she had won a lawsuit that was against the board of censors. They were planning to arrest the star of a play because of the provocative nature of the play. However, the court would declare a law that censors would be invalid. It was because of this woman that the auditorium would be in the light it was in. Even as the building aged, many famous people would come and perform in this building

This auditorium had been home to the Opry for thirty-one years. It relocated in 1974 because it needed a larger area. The new area was built specifically for this event and was named the official Grand Ole Opry House.

After this, the auditorium would be left to deteriorate. It was even talked that the building would be demolished in the early part of the 1990s. However, it was at this time that several concerts had been recorded at the auditorium. Emmylou Harris had recorded these concerts live and put them on an album that was titled At the Ryman. The performances done by Emmylou had made a major impact on the life of the building. Because of this, the building would undergo renovations and be restored. This was completed at the end of 1994. 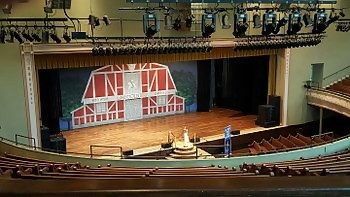 There is a legend that surrounds the auditorium that is named the Grand Ole opry Curse. There have been numerous paranormal activity reports throughout the years. Because of this, the building is now on a list of the many different haunted places in Tennessee. The curse is a legend that has been around since 1970. It is because of the people who are associated with the Grand Ole Opry have died tragic and even untimely deaths. It is believed that there are over thirty-five people who have fallen victim to the curse. That includes several plane crashes. The crashes took the lives of Patsy Cline and Jim Reeves. It would also include the murder of Stringbean Akeman. Another popular death surrounding the building is the death of Texas Ruby Fox in a fire and a car crash that had killed Ira Louvin.

Several spirits are said to live or haunt this auditorium. The names that are associated with the hauntings make it very popular because they are notable people. It is believed that people see the spirit or ghost of Hank Williams Sr. Hank is often seen backstage, however, there are a few instances where he is seen like a white mist on the stage while he is singing. He has also been seen behind the auditorium. This alleyway that he is seen in will lead to the Orchid Lounge. This was where Hank would frequent when he would perform here. 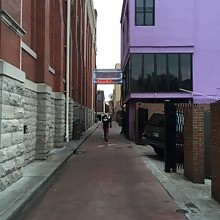 There is another sighting that many people report. It is that of a male who is dressed in all Gray. This man is never seen during performances, however, he makes himself seen during rehearsals of even after the performance. You can see him sitting on the balcony and overlooking the stage. However, no one can ever locate him. It is said that you can see him often and many people come just to look for him when they are getting ready for a performance.

The last spirit is said to be that of Ryman himself. Many people believe that he is there to make it clear that he does not approve of some of the performances that are going on in his auditorium. He makes loud noises that interfere with the shows that are going on. These are just a few of the ghosts that are said to haunt the Ryman Auditorium.