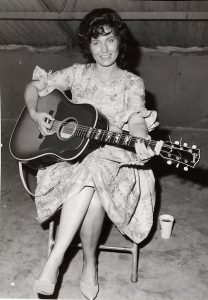 A Home Fit For A Coal Miner’s Daughter

Famous Loretta Lynn has always been open to discuss her family’s 19th-century plantation home. The Loretta Lynn Ranch is in Hurricane Mills, Tennessee, which is just over an hour from Nashville. She owns the entire town of Hurricane Mills and has lived on the property with her husband since the 60s.

It needs mention that Loretta has a history with the paranormal. She’s been an open book about her psychic abilities and the plethora of ghostly encounters she’s endured while living on the ranch. The sprawling green lawn of the Loretta Lynn Ranch leads up to a stately white home. Large pillars support the structure, and a second-story balcony overlooks the walkway up to the porch. The house is undoubtedly built for a star, and it seems as if the spirits surrounding the ranch have also made themselves at home here.

Hauntings At the Loretta Lynn Ranch

This singer-songwriter’s historic 1800s home is said to be haunted by deceased Confederate soldiers, a young woman who mourns her child, and even a bizarre former owner of the land.

After a bit of digging into the area’s history, Loretta and her family discovered that a Civil War battle was fought right on their property and that more than eighteen Confederate soldiers are said to be buried on the ranch’s grounds. They also uncovered stories of those that had lived in the mansion long before Loretta and her husband fixed it up in the 1960s.

The plantation is home to multiple apparitions, strange sightings, and disembodied voices. Her own daughters remember seeing Confederate soldiers inside the house and hallways on numerous occasions when they were growing up. Loretta’s eldest son also recounts instances of the paranormal when he recalled a time a soldier tried to take his boots off for him in the notorious “Brown Room.”

Even her grandson has stories to tell, especially one from his teenage years that kickstarted his belief in the paranormal. He told Tennessee’s WJHL News that “The power happened to go out one night, and as I was rounding the corner to get back into my room, the chandelier was the only light that was on in the house. What’s so strange about this is that the entire house is on the same electric breaker. There’s no possible way the chandelier could have been on while all the other lights were off.”

Loretta herself reports that she has seen a woman in mourning wandering the property, crying. She sees her full-bodied apparition inside the home and in the property’s graveyard. This spirit is said to be Beula Anderson, a woman who passed away over a century ago from a broken heart after her baby died. Loretta also recalls sitting at home with a close friend when they heard the sound of rattling chains coming from an area of the house known as the “slave pit.”

Loretta also tells of a time she tried to contact the spirits of the house via a séance. The singer and her closest friends were successful in their endeavor when they were able to speak to a spirit who called himself ‘Anderson.’ The spirit didn’t seem too happy to talk with them when it started shaking the table angrily until it broke after slamming onto the floor. With such a frightening event, Loretta searched for answers as to who this angry Anderson guy was.

Surprisingly, one of the original owners of the house was named James Anderson. Born May 29th, 1858, he was the founder and builder of the Hurricane Mills Plantation, and his spirit and his family are said to haunt the home still. They have not only been seen by staff and visitors but by Loretta and her family. James Anderson is buried on the property.

The mansion itself is actually the subject in Lynn’s song “This Haunted House.”

You Can Visit The Ranch… But You Cannot Go Upstairs

Loretta Lynn’s ranch is open for tours, but the staff does not allow visitors upstairs – and for a good reason. One of the most frightening rooms in the mansion is where two of Loretta’s sons refused to sleep. This is where her son felt the soldier trying to take his boots off when he and his brother woke up and saw a man pulling at his boots! They ran out of the bedroom and straight to their mother, exclaiming that a Civil War soldier was in their bedroom.

When inside the room, staff can hear knocking from inside the closet door, but upon further inspection, only Christmas decorations and stored items are inside.

The large front balcony is another of the home’s hotspots. Loretta tells of a time she came back home one day and saw a woman standing on the balcony. The only person home at the time was Loretta’s children and the babysitter, Gloria. Noticing that the woman was not Gloria, Lynn rushed inside to find Gloria to ask her. She recalls asking her who was up on the balcony, and Gloria stated that no one else is in the home. Loretta then told her she saw a woman in white, pacing back and forth, wringing her hands like something was very wrong.

They went upstairs to investigate but found no one. These aren’t the only paranormal reports that have come off of the ranch, however. Visitors report seeing full-bodied apparitions standing at the top of the stairs, on the balcony, and even along the walkway. Housekeeping reports that after they spend time straightening the albums that hang on the wall, they find them crooked a few moments later. Even the ranch’s manager states that the spirits will do things to let you know that they are, in fact, still around.

One review on the ranch states that the Loretta Lynn Ranch is genuinely haunted. A visitor and her family visited the home not knowing the history beforehand. As visitors to incredible locations do, she took photos of her family. In the photos was a thick grey mist, which wasn’t seen with the naked eye. The visitor states that there was no fog or mist in the area that night and no other lights than a few campfires. Several orbs were captured on film, cementing the idea of the paranormal residents in this visitor’s mind. After her visit, she happened to see a segment about the ranch on one of her favorite paranormal investigation shows, and when she heard about how haunted the ranch was, she couldn’t believe that she had captured some of the spirits on film.

Have you ever visited the Loretta Lynn Ranch? Were you lucky enough to come across the founder of the ranch? What about the Civil War soldiers that are said to wander the grounds? Perhaps you have some boots you’d like some help removing – just lie down upstairs and let the spirits of the Loretta Lynn Ranch get to work.