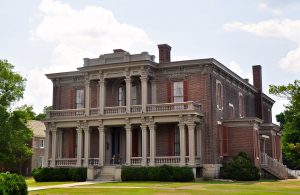 Two Rivers Mansion is located on the National Register of Historic Places and lies nestled between the Stones and Cumberland Rivers, hence its name. The beautiful 1859 antebellum-style mansion and the adjacent federal-style brick home were once the centerpieces of Donelson, Tennessee. The house was part of an 1100-acre plantation located on highly fertile, rolling land.

David McGavock built it in 1859 for his bride, Elizabeth Harding. The McGavock family and their descendants inhabited the house until 1965 when the last heir died, and the Metropolitan Government of Nashville purchased the property.

In 1819, William Harding purchased just over 470 acres of land from Willie Barrow at the intersecting Cumberland and Stones Rivers. The property included a sizeable Federal-style brick house built in 1802 by David Buchanan. Harding also acquired additional land, which added the acreage of Two Rivers up to 1100. In 1830, William Harding married Elizabeth Clopton and passed away in 1832, shortly after their only child was born. The child, a daughter, was named William Elizabeth Harding, named after both of her parents, and when she married her cousin David McGavock in 1850, she inherited the plantation.

In the mid-to-late 1880s, the estate was known as Two Rivers Stock Farm. It had a massive dairy operation that thrived. It was also known as the center for Morgan horses, the best and biggest provider in Middle Tennessee. Frank McGavock took possession of the estate in the late 1880s. The financial panic of 1893 created a depression in the area, and bankruptcy loomed over the farm. Frank’s only son Spence leased out the farm in the early 1900s to keep it from going under.

Spence McGavock married Mary Bransford in 1928, and the couple remodeled the mansion together, adding new plumbing, electricity, and heat. They lived at Two Rivers for four years until Mary’s mother passed away in 1932. Spence himself died in 1936 and left Mary to move back to her childhood home. Caretakers took over the operations at Two Rivers until 1954, when Mary returned.

Mary passed away in 1965 at the farm, and her will named many family members, friends, and employees as beneficiaries. She also wanted the remainder of her estate to be sold and the funds to be used for the Division of Hematology operations at Vanderbilt Hospital. The research fund named the William S. Bradford Fund, in honor of her late father still provides the hospital assistance to this day.

Two Rivers Mansion and Its Spirits

The mansion and its surrounding property are haunted by the spirits of deceased McGavock family members. The land that the home is settled upon was used to bury both Confederate and Union soldiers when the local cemeteries ran out of space to accommodate the massive burials. In recent years, the mansion has lived up to its haunted reputation, with staff members and visitors alike reporting strange occurrences. Disembodied footsteps can be heard echoing throughout the halls of Two Rivers, laughing and whispers are heard, and doors lock and unlock all on their own. The mansion even has its own ”woman wearing a color!”

One employee recounted the time she spent working at Two Rivers and that she herself had seen Lady McGavock wandering around the estate. She said she ”saw her apparition when in the early 90s, she was in the pocket doors wearing a white dress. She is fond of playing with the electricity and the water, and she loves to turn lightbulbs and flick off lights. It’s more like antics, rather than a scary haunting.”

But not every haunting here is friendly, and this same employee recalled a time that she was so frightened of the activity happening in the mansion that she left in a hurry for the day. The story goes that the staff of Two Rivers Mansion was setting up tables, and once she was alone, the large chandelier started to shake, the crystal prisms creating a very unique tinkling. She tried to ignore the sound, but eventually, the chandelier shook again, this time with much more force. She decided to leave her shift shortly after that! Reports of strange sounds from upstairs or near the bedrooms also flood out of Two Rivers Mansion, including the sounds of bouncing balls, giggling, and even streaks of white light flashing by you. The intense smell of roses is also experienced by staff as well as visitors to the mansion. Photos of orbs of all shapes, colors, and sizes have been captured on film. During a wedding in the late 90s, a photographer was taking candid photos of the bride wandering around the mansion’s grounds. He snapped a photo of her coming up the back steps of the veranda, and a figure can be seen in the upper window peering down at her, watching her on her special day.

Even a ghostly dog has been witnessed running about and playing with guests, with them later being informed that no dogs are on the property.

Feelings of heaviness and nausea permeate the mansion, and visitors tend not to stay too long inside of it. Employees state that it is one of the most active paranormal locations in the south and for sure one of the top ten most haunted in all of Tennessee.

”The Lady in Black”

Plenty of haunted locations have their own Lady in Black, and Two Rivers is genuinely no exception! This shadow figure has been seen gliding, yes, gliding across the floors of the mansion. Many believe that the lady is not human at all and is a curse that was placed upon the land by Native Americans who used to reside in the area. Others claim that the Lady in Black is a manifestation of the many deceased soldiers and their sorrow. Another claim is that the lady is simply Mrs. McGavock, unaware that she is dead, wandering around the property that she loved so much.

With further research, it is found that Two Rivers was built upon the land of a burial ground. At least 100 Native people were buried here, but the bones were not discovered until after construction. Instead of reburying the remains found in a respectful way, the property’s previous owner used them to decorate the fences and allowed children to use burial clubs as playthings. Blatant disrespect of Native culture creates a negative energy so strong that it seeps through time here.

The original 1100 acres of Two Rivers Farm do not exist today and were split up and purchased by a few different investors, including former President Andrew Jackson! The land here has been turned into a park and golf course with eighteen holes. There are even baseball and softball diamonds, a playground, and six tennis courts. The mansion itself remains, placed on the National Register of Historic Places, and it has remained untouched and unchanged throughout history. While the lands of Two Rivers have evolved, the home itself is frozen in time, holding all of the energies and the spirits of those who lived here. The sounds of the McGavock family echo throughout the ornate halls of the mansion, with laughing and disembodied conversations of souls gone by filling the air outside the home. Visitors will always feel them, their energies so strong, so set in their ways, that they are the history of the home. Another McGavock family member also still haunts his old home, the Carnton, which you can read about here!