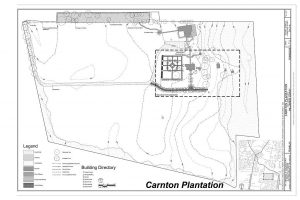 Built in 1826, the Carnton Plantation played a massive role during and immediately after Franklin’s Battle during the American Civil War. Carnton is a red-brick federal style 11-room residence, completed in 1826 by prominent politician Randal McGavock using slave labor. Built on a limestone foundation, which is said to amplify spiritual energy, the mansion was home to the McGavock family. Cedars line the driveway leading up to the home, giving it an authentic Antebellum look. To the northwest of the home, a 2-acre family cemetery sits. The soldiers that died in the Battle of Franklin are also buried there. The home itself was used as the most significant field hospital for the injured soldiers during the battle. More than 1,750 men lost their lives in the battle of Franklin, and more than 300 were treated, and 150 died right on the grounds on the first night alone. Four Confederate general’s bodies were laid out for a few hours after the battle ended on the back porch.

Beginning in the early evening on November 30th of 1864, the McGavock’s lives changed forever. The Confederate Army of Tennessee viciously assaulted the Federal army trenches along the southern edge of Franklin, Tennessee. The result? What is named one of the bloodiest hours of the Civil War, involving a massive frontal assault larger than Pickett’s Charge at the Gettysburg battlefield (which you can read about at our article here!)

The majority of this battle occurred in intensely close quarters after the sun had started to set. Just five grueling hours later, 9,500 soldiers were killed, wounded, captured, or counted as MIA. Nearly 7,000 of that number were Confederate troops. Afterward, many of the injured were treated right inside the Carnton Plantation home, staining the house and its floors forever, literally. Many of the wooden floors in the McGavock home are stained from its time as a makeshift hospital. The heaviest stains are found in one of the southern-facing bedrooms, which was used as an operating room. Three hundred men were brought to the McGavock home within the first night, and half of them died.

In early 1866, two acres of the plantation were designated as a final resting place for the Confederate soldiers killed during the battle on their property. The initial cost of burial here was $5 a soldier, the cost entirely covered by the citizens of Franklin within eighteen months. The entirety of the battle and its following events were a concerning depiction of patriotism and familial selflessness.  The McGavocks maintained this cemetery until their deaths. The McGavock Family owned Carnton until 1911, when Susie Lee, one of the McGavock widows, sold the property.

The Carnton Plantation was listed on the National Register of Historic Places, and in 1977 the home and all of its ten acres were donated to the Carnton Association and has been since restored and renewed. Artifacts from the McGavock family were preserved and collected to be kept here, including a leather-bound journal inscribed with the McGavock name, finger bowls, and even a cemetery book, which contained the locations of the final resting places of nearly 1,500 soldiers buried in the cemetery on the property.

A Bit of Gruesome Haunted History

1,700 Confederate soldiers are buried here, making this the largest Confederate graveyard in the entire South. A ghost of a young girl has been seen in the home’s kitchen who is said to have been murdered before the war by a jealous suitor whom she rejected. She is said to still sweep the floors at dusk. The spirits here enjoy the autumn months most, probably due to the summer heat pushing anyone around indoors or into the shade. At dusk during October, visitors may see the ghost of a woman floating effortlessly across the back porch or even the spirits of fallen soldiers out on the home’s surrounding fields. A Confederate general has also been reported pacing the front bottom porch during the fall as well. A mischievous spirit is reported here most often, and when the home’s curator heard some strange noises coming from the enclosed back porch, she went to investigate. She found two panes of glass taken down from a shelf and placed against the back door. She believes this sly spirit is that of the murdered young girl. The floating head of the cook who worked for the family during the Civil War has also been spotted floating through the hallway and kitchen areas. She can be heard bustling around the kitchen, going about her various duties, even in the afterlife.

The hauntings don’t stop there, however! A lady in white, a soldier, a young girl with brown hair, and Native American spirits have also been reported in the bedrooms, the back porch, and the grounds surrounding the home.

One report from a visitor who had an ancestor fight in the Battle of Franklin is truly chilling. Found on the Haunted Houses website, the report is as follows:

‘A man, Mr. P, who had an ancestor fight in the Franklin battle came at just after 5:00 PM to see Carnton Mansion, but it was closed, so he walked around the place, on a path that led to the back of the mansion, trying to soak up the atmosphere, and thinking about his relative who fought here and survived. Near the porch, he saw the silhouette of a man that he thought was about to get on a horse, but the horse vanished. Noticing another man on the porch, Mr. P asked him what had happened to the horse. The man explained that the horse was shot from under the other soldier as his horse had been earlier.’

The two men that Mr. P had seen were not physical beings but ghostly ones. He conversed with two Civil War soldiers’ spirits, peeking into the harsh world that his ancestor had fought through. One can only imagine the feelings this must have brought forth. It was almost as if fate had it that Mr. P would wander around the grounds instead of going inside for the normal tours. Almost as if he was meant to meet these two spectral men. Many visitors have reported seeing these men moving about the grounds and even trotting away into the horizon on ghastly stallions.

Spooky, right? The spirits here at Carnton Plantation are living out the past day after day, remembering the battles of all kinds that they endured. Places like Carnton and Wheatlands Plantations live as physical reminders of our past, no matter how horrid it may be. They are structures that house the restless spirits of ages gone by. Carnton and Wheatlands aren’t the only two haunted plantations in the area, which comes as no surprise due to their dramatic histories.

So, there you have it, one of Tennessee’s most famously haunted plantations and its underlying stories and secrets. Have you ever dared to visit Carnton in Franklin? Just under a half an hour drive from the Nashville city-center, Franklin is a historic hub and is truly a worthy trip. We’ll leave you with this short quote by the great B.B. King… ‘I was born on a plantation, and things weren’t so good. We didn’t have any money. I never thought of the word ‘poor’ ’til I got to be a man, but when you live in a house that you can always peek out of and see what kind of day it is, you’re not doing so well. And your restroom is not inside the house.’

For another read on one of Tennesee’s most haunted plantations, learn about Wheatlands here!