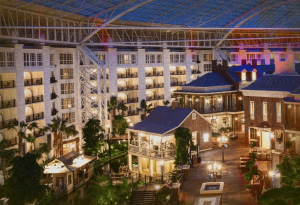 This resort is more than just 2,888 rooms. It is more than a stunning complex. It even makes the list of thirty largest hotels in the world. However, no matter how much you say it looks beautiful and how luxurious you believe it is, there is a much darker side. The Black Lady will be there. 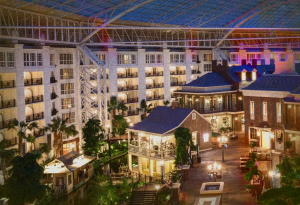 Opryland Hotel would open Thanksgiving day in 1977. It would open on land that was adjacent to the amusement park. This hotel was built to help with the Grand Ole Opry. It was built to support this. The original hotel would only have 580 guest rooms and a ballroom. The lobby was designed specifically. They wanted it to resemble a southern style grand mansion. There was an intricate and impressive staircase and even a chandelier.

The hotel decided to expand in 1983. The construction continued until 1984. During this time there were over four hundred rooms added and other facilities to meet demands. They had added a conservatory that would resemble a grand Victorian-era garden. This garden had over 10,000 plants and would remain a consistent temperature of seventy-one degrees.

They decided to add more rooms to the hotel again in 1988. They would add 797 more rooms and another two acres to the hotel. They would then build an atrium. This would feature a three and a half story waterfall with over 8,000 different tropical plants. They also had a lobby that would have over twenty-four check-in areas. This means they could check in about 580 guests an hour if needed.

In 1996 another expansion took place. This would expand another four and a half acres. This doubled the size of the existing resort. They would add one thousand guest rooms, an exhibit hall that was 289,000 square feet, a huge ballroom, and several meeting rooms. The best addition that trademarked the area was the Cajun-themed Atrium. This Atrium has a quarter of a mile long river. Keep in mind that this river is indoors! The guest can ride on flatboats down the river. Plus, another water feature has had jets added so that it can dance to the music. Water samples were taken from over 1,700 rivers throughout the entire world. This includes all rivers that are registered in the United States. This water is what makes the Delta River. They also added a steakhouse that was built to resemble a mansion during the antebellum era.

It wasn’t until October of 2001 that the Opryland Hotel was rebranded. It was now called Gaylord Opryland Resort and Convention Center. Some people just call it Gaylord Opryland because the real name is far too long. The name came from the original brand. Opryland was a strong brand that was unique to not only Nashville but Texas as well. However, it would not fit with other parts of the United States.

The resort had planned to add an amphitheater with 5,000 seats in the future, however, these plans were dismissed because they wanted their convention center expanded.

Tragically, in 2010 a large flood had devastated most of the town. It even caused quite a bit of damage to the hotel. Guests had to be evacuated because waters would rise up to ten feet in some areas. The hotel had undergone some major renovations and would reopen several months later. They had added five restaurants and restored the rest of the hotel during this time.

It was in 2012 that Gaylord Entertainment announced that they would be partnering with Dollywood Company. They were going to build a seasonal park with snow and a new water park. They would build this on land that the company owns. This was estimated to cost fifty million dollars. It was expected to be open about two years later until Dolly had withdrawn the partnership.

It was in October of 2014 that a 600,00 dollar fine was imposed. This was imposed because they were interfering with private wireless internet connections. This meant that they would link portable computers and to their personal phones. This was done in the convention space of the hotel.

It was considered a containment feature. They believed that they would monitor the system. However, they were not using it as it should be. The system was supposed to be monitored to remove rogue access points from the network. However, they would misuse this to send deauthentication packets to their client’s computers and phones. This is unlawful because it is not part of their network. It is part of individual subscribers. They would do this because it would disconnect the consumer’s devices from their wireless internet. These were sent so that the people at a convention would be forced to purchase the internet from the hotel. Keep in mind the rates of the hotel were 250 to 1,000 per point.

According to FCC, hotels cannot do this. They are not allowed to disable personal hotspots and charge their consumers high fees to use wireless internet networks. The practice that was happening would force people to go into a position they didn’t want to be in. They would pay twice for high internet networks or have to go without the internet. No matter how much the hotel was fined, they will continue to deny that it was illegal because they state they used FCC equipment to protect their clients from a hacker.

You know that the original hotel had 580 rooms. These rooms were always booked because the Grand Ole Opry was in Nashville as well. When the business would grow, the visitors would grow, and this would cause the hotel to grow. It would keep expanding to meet the needs of a growing city.

There is a lobby known as Magnolia Lobby. It was designed to resemble a southern-style mansion. It has an elaborate chandelier. However, this chandelier is connected to a very active spirit. 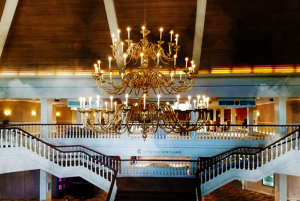 This spirit is known as the Black Lady. It is said that she will haunt all areas of the property. One guest reported that when they had approached an elevator that was open, the only person inside was a woman who was dressed in black. They would enter the elevator and the doors of the elevator closed and the woman had disappeared into thin air. She will also be active in the evenings outside the rooms of the guests.

Visitors in the hotel have complained of stomping and running sounds in the hallway. Generally, these sounds are accompanied by a weak moan. Security would go up to see what was going on only to find an empty hallway.

This Lady in Black is also known to go inside the rooms at night. She is known to wake up guests that are sleeping and whisper miss or mister into their ears. This is sure to wake anyone up! However, when people wake up, no one is anywhere to be found.

Despite these stories and her dreadful attire, she is not a violent spirit. She is simply a woman who dresses in Black. The Black Lady isn’t going to destroy or be violent to anyone or anything. In fact, her doings are so innocent that the hotel staff will blame one another for the actions that happen. 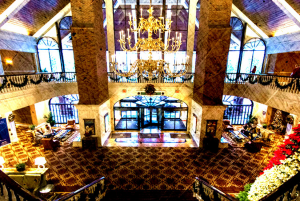 The hotel is a very large resort today. It has almost three thousand rooms and is one of the largest hotels in the entire world. Marriott International runs this resort. No matter how much the property expands or what renovations will happen, the Black Lady adapts. She has been seen at every corner and area on the property.

Many people will visit this area not only for beauty but for the thrill of paranormal activity. If you have the chance to stay here, remember, the Black Lady won’t hurt you.